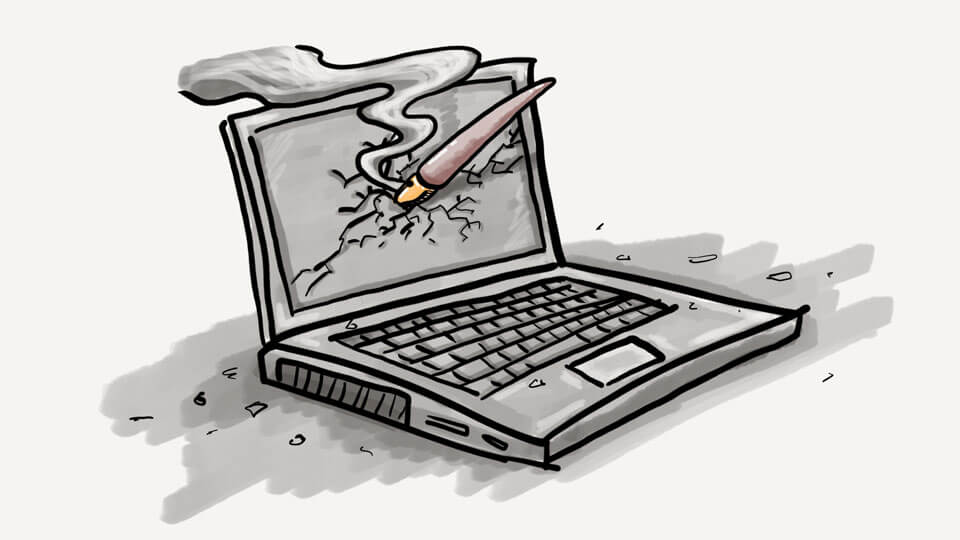 Would any modern writer willingly go back to the days of typewriters? I know a few who would, but the rest of us prefer to stick with computers. They beat typewriters in terms of speed, ease of use, and efficiency.

But should we completely discard type- or hand-writing? Are there any benefits left to their use?

Yes! A medium doesn’t only transmit a message. The medium is the message.

To be clear, I don’t advocate we all go back to using typewriters. Those days are long gone. But I wanted to share some of the cool insights I discovered when studying how writing developed through centuries. Understanding both advantages and disadvantages of the tools we use today can make you a much stronger writer.

The Way of the Keyboard

For the time being, the keyboard is the most efficient method of writing your thoughts down. Keyboards are everywhere. On our cellphones, our tablets, our laptops, refrigerators, and will probably end up on toothbrushes before long.

Any word processor in use today is a writing tool that goes beyond the wildest dreams of all the great writers that came before us. Why worry about it, then?

Because the speed with which your computer processes information outpaces the speed of your thoughts, leading to some unforeseen consequences. We adapt to computers by thinking faster, and, at the same time, disregard our ability to have precise and quality thoughts.

The Way of the Typewriter

Take a step back.

Committing words to the page used to mean just that; slapping letters onto a standard-sized sheet. Back in those days, writers didn’t have access to endless supplies of paper and ink ribbons, so they were rather careful with what they wrote. Any edits meant that whole scenes or chapters had to be rewritten. Sometimes many times over.

Precisely because of the typewriter’s limitations, thoughtfulness became a hallmark of many twentieth-century writers.

Days of typewriters are over, much like the days of limp cigarettes between writer’s lips, or the ashtrays overflowing with cigarette butts. We moved away from typewriters (and cigarettes) for good reasons.

Most twentieth-century writings came out heavy like the devices used. Thoughts flowed onto the page in the order of being had, not the order that made them interesting to the reader.

The Way of the Handwriting

We won’t go as far back as clay tablets (not to be confused with ancient iPads), but writing by hand is how people wrote for most of the recorded history. Any completed manuscripts used to be one of a kind, treasured and kept under lock and key. Scribes dedicated their whole lives to make copies of the most valuable pieces of writing.

Today, writing on paper is the slowest of all writing methods. Why should anyone bother, then?

The speed with which you write by hand always lags behind your speed of thinking. After a while, your thoughts slow down to a careful and deliberate pace. Suddenly, you have the time to write short, precise sentences and better paragraphs. Given the extra time, even the most fluffy thoughts gain definition and substance.

Compared to keyboard typing which allow us to practically vomit words onto a page, handwriting turns anyone into a careful scribe.

My favorite part of writing by hand is the ability to scribble things all over the place. Paper doesn’t have the limitations of writing software. It allows you to add inline notes, draw arrows, diagrams, or stick figures if you feel like it. It’s awesome.

The best use for old fashioned handwriting today is writing journals. What better time to slow down if not when you’re trying to untangle the spaghetti of your thoughts to make sense of your life?

Getting the Most Out of the Keyboard

We had good reasons for moving from stone to clay, clay to paper and quills, quills to the typewriter, to finally arrive at keyboards. That doesn’t mean computers are perfect as writing tools. Writing software can cultivate many bad habits.

Don’t write and edit at the same time. The urge to edit while you write can be overwhelming. It’s the first and the biggest pitfall of modern writing. You’re always only a few clicks away from tidying up that last sentence.

But consider this: Writing is a creative activity, predominantly right-brained. Editing, meanwhile, is a left-brained critical thinking activity. Each time you switch between how you think, you slow down and interrupt your flow.

My solution to this problem is to use the light mode of my writing software when writing, and the dark mode when editing. Whenever I feel the urge to edit, I make myself switch between the modes. It reminds me of the cost of going back and forth.

Turn the spellchecker off. On a similar note, spellchecking is one of the few sneaky ways in which writing software makes us trip up. Words underlined with red make you pay instant attention. Instead of riding the wave of creativity, you stop and fix typos. Why?

Focus on getting that story out of your head. Performa a spellcheck when you’re done.

Learn the art of thoughtful writing. Not every thought is worth having, fewer yet deserve to be written down. Unfortunately, computers make it far too easy to write down everything leaking from our heads.

If you have a feeling your writing is too wordy, try an app like Draft. It’s Hemingway Mode won’t let you delete any words you write down. Very helpful for learning to write before editing, and to think before writing.

Takes notes. One of the few things a computer doesn’t let us easily do without distraction is to jot down the occasional note for later use.

Yes. I know there are apps for that. But let’s be honest. How many times have you switched to a note-taking app, noticed an unread message in some other app, and then ended up spending thirty minutes on Twitter instead of writing?

Avoid distractions like the plague. Keep a small notepad next to your keyboard and use that for notes.

Taking Control of the Medium

Like painters using different paints and brushes, writers depend on tools to pursue their craft. Understanding how the tools you use impacts the results of your work separates the great from the rest of the crowd.

Well, wouldn’t even think about writing this way. Nice article, worth reading and btw this keyboard you show me today it’s just great.

Being honest I thought this article is going to be about the writer’s hacks. I was surprised that it was about something much deeper like throwing thoughts into the “paper”.