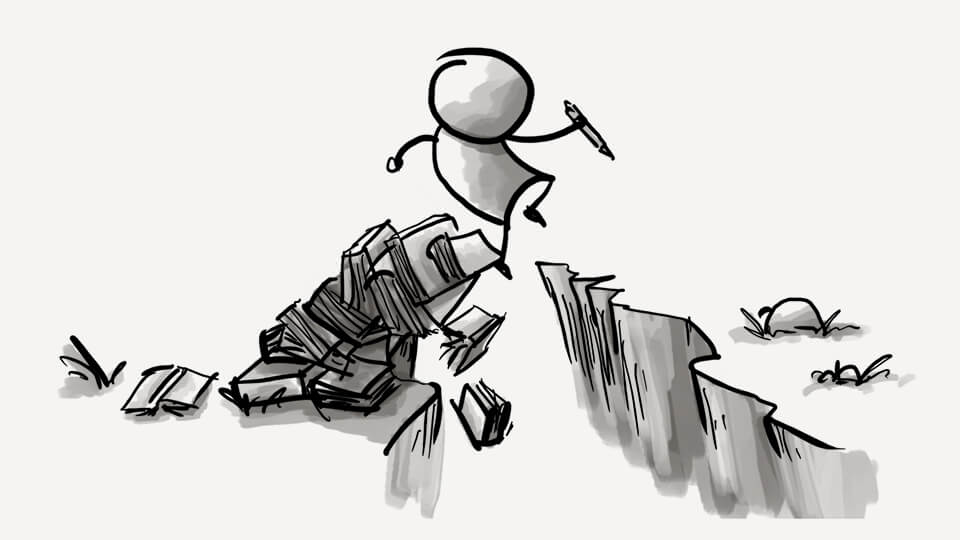 At a certain distance, you can’t tell a friend from a stranger because from far away, all human faces look more or less the same. Features dissolve into colored blotches. Step back some more, and the blotches become dots; points on a chart, numbers in a spreadsheet. They’re not people anymore.

The sense of community, attachment, even attraction, all come from various forms of closeness. That’s why we grieve for family members, but not for distant relatives or our neighbors. That’s why we’re moved when a disaster strikes our country, but not when we hear the news of the war in Syria or the devastating effect of locust swarms in East Africa.

Distance, physical as much as emotional, limits our ability to experience empathy. From an evolutionary standpoint, it makes sense that we care for members of our tribe, but not so much about the members of other tribes. It’s difficult to feel for someone you don’t know, and know someone you haven’t even seen.

That’s why war photographs get so personal. A picture of a single child tells the story of a nation better than images of suffering thousands. Great photographers try to bring the world closer together by showing us, from up close, the human face of strangers.

It’s something I’ve realized during a visit to the Museum of Second World War that opened a few years back in Gdańsk, Poland. That museum excels in more ways than one, but if there was an aspect of it that stood out, it was showing the human face of all sides of the conflict. (Not a popular sentiment in Poland, a country which prefers to play the role of a victim of history, not its participant.)

In one room, still figures in immaculate nazi uniforms stood around a Christmas tree adorned with black-red-yellow baubles and paper cut-out svastikas. In another, old-fashioned phone booths let you listen to the letters that german soldiers have written to their families back home. You couldn’t help but think these were all… people. Not some pale-faced nazis, which were something between a mannequin and a machine, and only a little human, but real people full of hopes and dreams.

Under the tree lay a picture book, with shreds of wrapping paper still around it, as if small hands unwrapped it moments ago. Signed “From Granny to little Ursula, with love.”

How warm and kind-hearted it all seemed until I looked closer. The book, titled The Jewish Toadstool, depicted the disease that, according to the authors, has set in German society. It hit me hard and stayed with me since. How an object so benign as a children’s book, could still be used as a tool of stripping people of their humanity.

But of course, it was. Prosecuting Mr. Bergmann who lives downstairs at number 4 is impossible, but drive a wedge between him and all his neighbors, and prosecuting a Jew becomes possible.

The museum in Gdańsk did not shy away from difficult themes. You could read a diary of a starving Russian girl, who notes, with growing detachment, the circumstances of death of her parents and siblings. A few breadcrumbs are scattered in the display case. You could take a walk down a street—yes, a whole street—where time has stopped just before the war, take a peek into the little shops, and marvel at all the authentic period merchandise. An enchanting experience, until you noticed a shop front shattered by a rock. The Star of David on the door told you all you needed to know.

But, at least for me, the museum had reached its emotional crescendo when I reached a curtain made of photographs of victims of the concentration camps. Not those sullen-faced wartime photos, but shots snapped before. Happy, brilliant people, no different from my friends and family. Some even looked alike.

Most of them were killed not long after the photos were taken, and those who survived never quite recovered, because how can you, after…

I remember thinking to myself, have humans really done all that to other humans? It’s so hard to believe even when you know it to be true, and harder yet when you get to know the story of everyone involved. How could’ve they grown so far apart? And how far down that road the pandemic will send us?

We have to wonder about what social isolation is doing to our perception of the world. Our tribes are shrinking. Our exposure to other people and their views has all but gone away.

It makes it too easy to forget that the numbers we see every day are people, not the other way around.

This is good, and I believe you are correct. My hope is that we come out of this pandemic more aware of each other as people, but, due to how people are acting, I’m starting to doubt it. Thanks for posting.

I also hope that people will understand the inevitability of science, and how it refuses to align with our wishful thinking. Such shift would help us deal better with climate change.