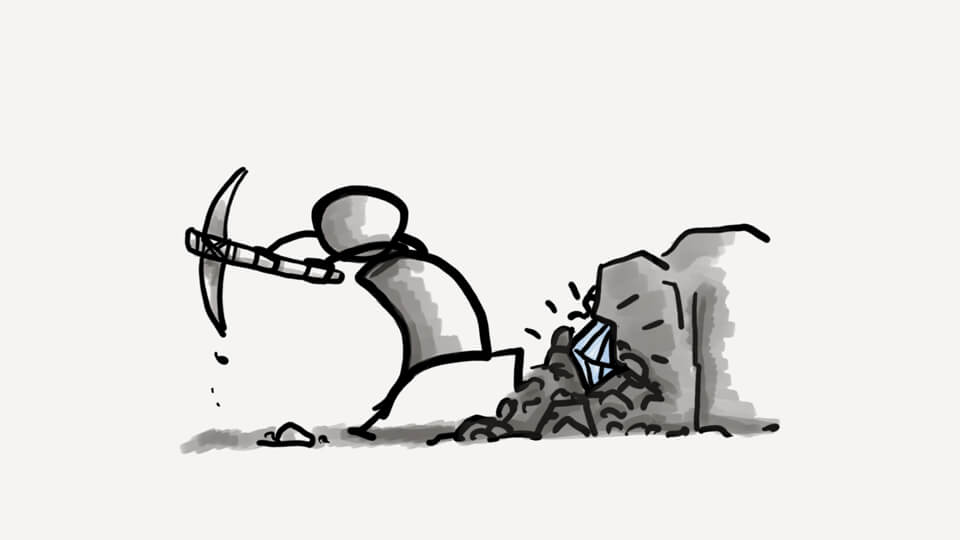 With enough practice, everyone can come up with new compelling ideas and whole worlds nobody else had visited yet. You can find a thousand great ideas and characters under a rock if you look with a trained eye.

Most writers settle for stories that came to them, instead of going out there and finding some better ones. We’re going to use a technique not many people know about; getting a feel for it will help your stories stand out from the crowd.

Oh, and feel free to use anything we come up with today. Ideas are a dime a dozen, it’s the execution that gives them value.

I could talk for hours about how this is supposed to work, but I think it’s best if we experience it together.

We’ll enlist the help of my good friend Brewer’s Dictionary of Phrase and Fable and open a page at random to find an entry we could work from.

Alright, here’s what I found: Suspend your disbelief and let’s take a plunge together.

So, we have a kind of commissioner, whose goal is to protect people from the government. The first question to arise is why such a post was introduced. If we look through the associations already building in our heads, we’ll most likely see a man with a magnificent mustache wearing a tailcoat and top hat. The very image of an Edwardian gentleman. Was he the one to propose the idea to the parliament? If historical fiction is your thing, this could be the very seed of your story and your protagonist. We would, of course, need to give him some character traits and desires and see what came out of the setup. But today we’re more interested in worldbuilding than characters.

What kind of a setting lurks in this context? Let’s set the obvious history aside, and look for some alternative history, or near-future science fiction.

In which times would such a commissioner be of most use to the society? Some form of oppression comes to mind right away. You might say we had our share of dystopias in recent years, but that isn’t the point of the exercise, we’re fishing for something new and original. And I don’t think we’ll be able to escape the dystopian associations with this particular term.

The Protector of the People

Such an Ombudsman could be the stalwart protector of the common folk, especially at the time of some great social or economic crisis. This is still pretty basic, and we want to give our idea more depth.

In an alternative history, I see the organization of the Ombudsmen grow into strong opposition to an increasingly oppressive government. Crank the concept up a notch (or fast forward some twenty years of our alternative history), and the organization has grown into resistance to the government. Maybe the original body has been dismantled long ago, but it served long enough to become a symbol for groups of rebels. The guerilla fighters call themselves the Ombudsmen, and they are a sore in the eye of the government because their very name stands for something important. It’s easier to call them illegals, and terrorists.

Not too bad. Good stuff. A juicy concept with a bit of built-in symbolism. Nothing stops us from using it as a base for a short story, or maybe even a part of a background for a novel.

We could pat ourselves on the back, and congratulate both of our brain hemispheres on a job well done. But why stop now?

Turning the Idea Around

Some of the best ideas hide in contrasts, or on the very edges of the meaning of certain terms. Today I’ll focus on a complete contradiction of our term. How could we twist it, so it became an insult to the original idea?

What if we made the service a government mouthpiece used to keep the population quiet? Sort of a Ministry for Obligatory Happiness. It’s pretty realistic too, lots of terms became twisted into their complete contradictions. Even in the last century, many civilized countries grew into oligarchies, all under the pretense of preserving the values of a democracy.

Imagine loudspeakers, strategically distributed through city, droning in a canned voice things like “The work you do today, is your country of tomorrow.” Not all the time. Just a couple of minutes apart.

(That by the way, is an actual slogan used in the 80s in the Soviet Bloc. In my hometown, there still stands a half-ruined building where you can read the lettering under layers of peeling paint.)

Our story needs a character now. And what better heroine than Barbara, working at the office of the Ombudsmen propaganda department. She’s in charge of writing the slogans, ashamed of her job, and forbidden from mentioning it to anyone, not even her husband Gregor.

Gregor loathes the system; he hates propaganda with a passion. When the speaker outside their small apartment window makes their little daughter cry at night, he tends to say things like:

“People who come up with these things would do everyone a favor if they hanged themselves.”

Barbara waits till he falls asleep before she can cry in silence into her pillow.

Naturally, after some incident, maybe a misplaced note or an uncalled for reaction to his comments, he figures out what his wife does at the office. They argue so loud, and for so long, half the neighbors can hear them. Barbara’s cover is blown.

Barbara spends the whole night going from family member to family member, but Gregor and little Rosa are nowhere to be found.

In the morning, unwashed and disheveled, but fearing the return to her neighborhood, Barbara goes straight to her office. Her superior, a man whose name she doesn’t even know, waits for her there — with Rosa on a chair, eating a cookie.

“Barbara, I see you need rest. Take a day off,” he says. “I arranged for a bigger apartment for you and Rosa, closer to work.”

Barbara freezes, afraid to the one question on her mind. Where’s Gregor? She senses something terrible and important has happened last night; all because of her. Her lips tremble.

“We’ll take care of your assignments while you’re gone. I expect you back on Monday.”

Not too shabby, eh? Especially for something we conjured up from the pages of a dictionary. I stopped at Barbara because this post had to end somewhere, but I wanted to show you how easy it is to take a concept and plunge into it. Using this method we can go as deep or broad as we like. Think of the amazing ideas waiting to be unearthed.

I hope you enjoyed this practice and found some valuable inspiration for your own stories. If you went further than I, please let me know about the fantastic concepts you uncovered. Use Twitter or the comments section below.