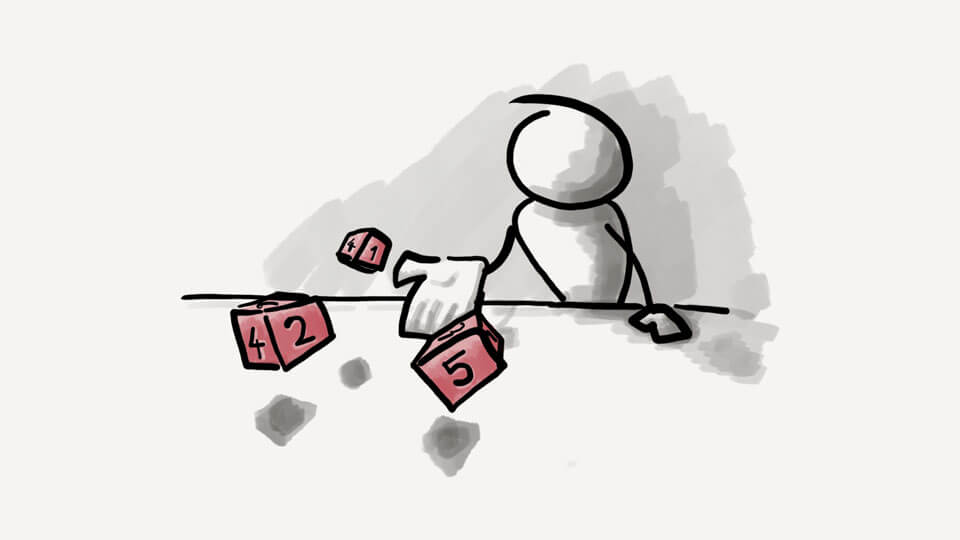 Have you ever heard about pen-and-paper roleplaying games? We’re talking Warhammer, Dungeons and Dragons, Cyberpunk, 7th Sea, and the like. A group of people sitting at a table and telling a story together. The game master (GM) serves as the narrator, the players play the roles of the heroes the tale is about. The few hours that follow are pure creative magic.

I’ve been running RPG groups for 17 years now, and the hobby never ceased to amaze me. It taught me a lot about storytelling. I’ll share what I learned so you can become a better writer without having to dedicate the next two decades of your life slaying princesses, and saving dragons.

In theory, the GM prepares a scenario before each game session. In practice, he can throw that script out of a window after the first five minutes of the game. Why? Imagine writing a story where all of your characters have a will of their own and a strong instinct for self-preservation.

“The bush rustles. A brown bear strolls into the forest clearing. He notices you.”

“What? No! George, for Christ’s sake, this is where you’re supposed to get seriously wounded so that Helen can come and save you. Can’t you see? She’s going to nurture you to heath, planting a seed for the feeling that will grow between the two of you. George? George! Where have you gone?”

Having to improvise a tale with other people in control of all the major characters poses a tough challenge. Forget careful plotting, editing, and rewriting. Forget taking time to figure out a plot problem. The show must go on. Every little detail has to be improvised. Vivid locations, colorful characters, and plots that weren’t there before, all have to enter the narrative on the fly. And everything needs to come together to form a compelling narrative that everyone at the table can enjoy, a story that has a beginning, a middle, and a satisfactory ending.

It feels like writing half a novel in one sitting. Yet tens of thousands of gaming groups around the world do it every time they meet. People who are no writers sit together and make magic happen. How?

Plenty of tricks in that particular bag. I’ll share the three that are not so obvious and took me years to figure out. Once I did, I realized they apply to writing even more than to roleplaying games. After all, GMs suffer from the exact same problems that writers do.

Say we want the heroes of our story to find a murder weapon. The murderer, being a clever fella, hid his army knife in some dumpster in a back alley behind a butcher’s shop. That way no police dogs could sniff it out. Well done murderer. But for the story to progress, the heroes have to find the knife.

This is one of these classic moments when I’d normally spend an hour walking around the apartment coming up with nonsensical reasons the heroes could have for visiting a goddamn back alley in a different part of town.

When you GM a game, you don’t have an hour. If heroes don’t find the clue soon, everyone will have a bad time. So you start teleporting the murder scene around.

In your head, the butcher’s shop was in a different part of town. But is there anything preventing it from being someplace else? No. You can teleport it wherever you want. Maybe even right next to the police headquarters. That would make things interesting.

Would the heroes notice you’re cheating? Of course not. For them, the shop would always have been next to the police station because that’s where they found it.

What’s more, depending on what the heroes do, the knife doesn’t have to be in the dumpster. What if it’s one of the many sharp knives in the butcher’s shop? An army knife would surely stand out among shining steel meat cleavers.

Or maybe one of the heroes asks to use the toilet and finds the weapon glued to the rear of the flusher.

The best part? No one knows you’re cheating. The story holds up.

When we write, we often get so attached to our plot ideas that it’s hard to let go because then we feel like we’re not telling the story we wanted. Instead of gracefully teleporting the knife around, we give our heroes a ridiculous reason to drive to a different part of town and make them search behind a rusting dumpster. Why would they? If it didn’t make sense in the first place, the story will suffer.

The Knife with a Personality

Why end our magic act there? Nothing stops us from transforming the knife into a person. What we’re really after is setting the heroes on the right trail. Forget the knife. Maybe the butcher is the real key to the murder mystery? He can tell our heroes a fascinating story about a troublemaking apprentice he had to let go last year.

If not the butcher, then a cab driver, or even an accidental hot-dog vendor. True, a hot dog guy has no right to know the whereabouts of a murder weapon, but he might have heard his mate Jeff boasting in the pub last night about a knife found in a dumpster.

“Really solid blade, that one. Strange what people throw away!”

The important thing to remember is that the story doesn’t need to go according to plan, it only needs to be believable.

This last bit of advice more about the players, not the GM, but it works great in writing. Sometime last year, my players came up with this rule:

“If you see a tavern burning, run towards it. There’s something important you need to save from the fire.”

And what an amazing rule. Danger and adventure are not optional. Do our heroes have a reason to run into a burning tavern? Of course they do. They just need to figure it out before they burst through the front door of a fiery furnace.

These are the scenes we get owing to this rule:

“You see smoke billowing out of tavern windows.”

“A ragged figure curled on the ground cries in the alley.”

“I know this woman. Mary? What are you doing here out in the cold?”

“You hear multiple gunshots some two blocks away. The police sirens are getting closer and closer.”

“A shootout in broad daylight? The gang must be baiting cops to get them away from the bank. We need to warn the commissioner.”

(At that moment the GM realizes he screwed up. He hadn’t thought of that, and has to furiously improvise).

Remember it isn’t your job to convince your character to participate in your story. It’s their job to follow the action, and come up with great motivations. But you have to be open for changes in the narrative (like with the bank example). Trust me, your stories will be better for it.

What do You Do?

Most beginning GMs, much like novice writers, start their journey by designing big convoluted plots. When their games derail, they blame the players for not “figuring it out.” Writers don’t have any players to blame, but when thing don’t go according to plan, we often stumble instead of improvising something new, cool, and interesting.

Do your readers a favor and take them on an adventure.