The Three Writing Mindsets That Make You Struggle 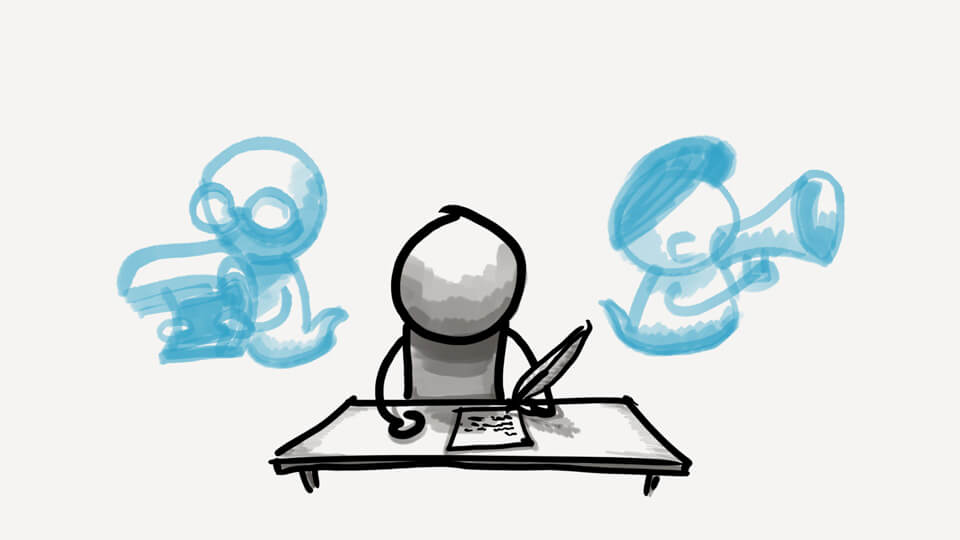 When you read about writing you often hear terms like plotting and pantsing. You hear people refer to their writing method as a process, as if creativity could be bottled up or distilled into a sequence of steps. The realities of writing, however, are much more complex, and utterly nonsequential.

Pantsers who sit down and just write, making up stories as they go along, and plotters who need a detailed outline of a story before committing the first words to the page, are two extremes of a whole spectrum of writers. There are people who excel at these extremes, but for the vast majority of writers, the extremes are highly impractical. Everyone’s mind is different.

Some people prefer only a small dose of planning before plunging into a narrative, others write disjointed snippets of a story to get a feel for the whole thing, others yet compose whole books like a tailor, sewing together a patchwork of scenes and ideas. There isn’t a single right way to write. The only end goal is to make your readers care and feel.

A workflow can guide you, but it won’t write the story for you. Well, not a good one anyway.

Let me tell you where our struggles come from.

The most common problem writers experience is the need to edit as you write. Once you finish a sentence, you see how ugly it is. The first instinct? Edit that bastard. You fiddle with your wording, fix typos, and then sprinkle the thing with a comma or two. You now have a better sentence. Meanwhile, your train of thought has left the station.

Where were you? What was that next sentence you were about to write? You can’t remember.

Writing things down is a predominantly right-brain activity. Beating them up into shape is a left-brain activity. Switching between the two carries the cost of interruption. A pretty big cost if research is to be believed. (“Ooh! An email! I better answer it!”). It takes between two and five minutes to return to your work after an interruption.

Answer a text, or an email, or stop to edit your work, and you made finishing your piece that much more difficult.

Remember that great idea you had as you were falling asleep? How easy it would have been to write it down? If only you had a pen and a piece of paper on the nightstand. Well, doesn’t matter. You promised yourself you’d write it down in the morning.

You woke up, dressed up, and went out to walk the dog. All of a sudden you remembered you had a fantastic idea last night. But what was it?

Even if you remember— I never do— it would have taken you considerable effort to fish the idea out of your busy brain.

That’s why editing while writing is about as productive as taking a break to answer an email. Each action other than putting words on the page introduces a new context. As some parts of your brain light up with activity, others dim.

This problem used to drive me nuts. And to be quite honest it still sometimes does. In my personal hierarchy of priorities, my friends and family take the top spot. If I get a call from my mother (love you, Mom!) I drop whatever I’m doing and have a chat. If I get a text from a friend, I reply.

Ideally— as far as productivity is concerned— I should put my phone on silent and ignore everything and everyone. But life’s not ideal, and you don’t have to go into extremes to be effective. Not every little buzz is equally important.

Social media notifications? I have them all turned off. Email notifications? Likewise. Reminders, to-do’s, calendar events; all share a similar fate. I don’t want my phone to drive my behavior.

What about the internal editor, then? He doesn’t exactly have a notification toggle. While writing this article I had no fewer than twenty impulses to self-edit.

A boring part of the answer is practice. Each time you succumb to self-editing impulses, you reward yourself for the behavior and, in effect, ask for more. A more interesting solution is to write with your eyes closed. The editing instinct kicks in only after you’ve seen your writing on the screen.

Write with your eyes closed and let the words fly. The blinded self-editor can only sigh in resignation, and learn to respect your creative self.

Writing and editing. Two mindsets. Two hats all writers wear. What about that third one I mentioned in the title?

The third mindset is something I call the game master, or the director mindset. When directors go about their business they organize movie sets in anticipation of the moment when the cameras start rolling. They prepare for what comes next. If you’re an experienced writer you may already know this mindset on a subconscious level. You use it when you lay out a plan for your story.

However, this mindset has a tendency to intrude on writing too. As you write your story, you may realize it’s taking a different course than what you intended. A character you planned to use in the second act is now getting killed in the middle of act one.

You feel like the shoot has gone wrong. You want to cry “Cut!” and go back to the drawing board.

I say let the cameras roll. Finish writing the scene or the chapter, see where it lands you. If the unforeseen event makes you go back to the drawing board later on, fine, but only after you finished the scene. Questioning yourself as you write will not help the part of the story you’ve already written nor the one you are about to write.

Writing is hard. I would like to claim it’s one of the most difficult forms of art. It probably isn’t.

Writers either tend to struggle more or— because they’re writers— tend to talk about it more.

The director, who preps the story before writing, the writer, who commits words to the page, and the editor, who makes sure the finished piece reads well, are all the same person: You. That’s why so much of writing is a struggle.

Understanding the different mindsets, and knowing when to use each, can hopefully ease some of your struggles. Try to wear a single hat at a time, and see how that works out.

Thanks to this approach my own writing time became a much more enjoyable experience.

(Though I wouldn’t go as far as describing it as pleasant.)

A newsletter for chronic overthinkers.