The Reason why Quantity Matters 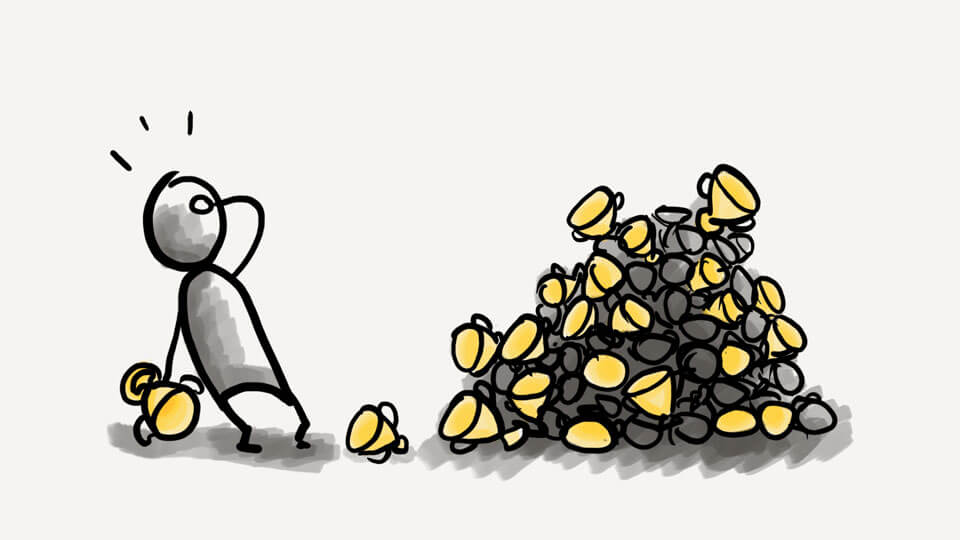 Writers have ideas all the time. Every now and again a writer comes across an idea so persistent, it demands to be written down. He then spends hundreds of hours extracting this idea from his head, just for it to bugger off. Because once it’s written down, others can worry about it.

I used to think I need to wait for such an idea to find me, and that once it did, I had some divine obligation to turn into a polished story. Then I read The Atomic Habits by James Clear. While the book talks mostly about habit formation, and how our environment shapes our behavior, it also cites an anecdote that made me rethink my whole attitude to art in general.

Jerry Uelsmann, a professor at the University of Florida, decided to run an experiment on his class of film photography students. He divided them into two groups.

Come the end of the term, the professor was surprised that all of the best photos were produced by the quantity group. The group never worried about the quality of their work, so they spent time experimenting with lighting, composition, and such. At the same time, the quality group spent most of the semester coming up with elaborate theories about taking great photos, but less time practicing.

Applying this to Writing

I don’t know about you, but if I could choose, I’d rather be in the quantity group. In fact, ever since hearing this anecdote I made deliberate efforts to abandon the perfectionism, over-thinking, and theory crafting that constrained the other group.

That’s why I don’t have a list of three or four article ideas for next week, I have a hundred. When I search for story ideas, I try to come up with as many as I can, then cherrypick the best. I see no reason to stop there, so I apply the same technique when I search for my heroes and villains, subplots, locations, events, plot-twists, and resolutions; the whole bunch. And let me be honest, most are rubbish, but allowing myself to be shit at something became a liberating experience.

The Best is the Enemy of the Good

As my good friend used to say, failure is the manure of success. Exactly where he took his sayings from, I’ve no idea, but there was always some truth to them, even if they smelled faintly of the countryside.

When writing, do you allow yourself to experiment and fail? Or do you try to make every story perfect?

Do you spend ages obsessing about every scene, paragraph, and chapter, even every side-character?

Most writers do. They pour their heart and soul into their writing because they care so much about their stories. But that obsession can only take them so far. Like the students from the quality group, they get stuck theorizing and being consumed by little details. I’ve yet to meet a writer who wasn’t like that at some stage.

But if you want to tell great stories, then you need to take advantage of your creativity. Come up with a hundred ideas, even if some sound like utter crap. Note everything down and find the best of the crowd. You’re a writer, you read so much you already have a great taste for storytelling. You’ll know your winning idea when you see it.

In the next post, we’ll work against the clock and experience this technique in practice. I can’t wait.

Well shit… 😀
I’m writing for the first time. And the story that I’m working on isn’t short, its big, and I mean BIG. HUGE.
On one hand I do want to go ahead and practice my wordplay and writing. But on the other hand I fear that once I start working on something other than my main work, then I’ll forget some of the story or its epic parts, or just that I’ll lose momentum as I work to improve my craft.

You should go and have fun with your writing! Write to your heart’s content. See where that takes you. By the time you finish that big, epic book you will be a much better writer than you are today. Creating something for the first time is one of the best feelings out there, cherish it, and don’t worry too much about style, technique, and optimization. You’ll have time for all that later. However for there to be a “later” you need to take pleasure in what you do now.

What’s your epic book about?

In a world so fucked up, you’re a person too sweet to exist. Not a very good analogy but you get it, Thank you sebastian. I read your replies and just the support I feel, its huge. Thanks.

I’m going to print this comment… Frame it… And gloat when no one is watching!

Okay is this guy talking to me or what? I have torn over a hundred pages of stories I didn’t think made sense or perfect enough, I focus so much on making sure I sound very intelligent till I start to tell myself I can’t be a writer….i have written roughly two uncomplicated stories that I think it’s all crap and for the past four years I’ve been stuck on just one story, trying to make it the best and over this past four years I’ve torn more than 100 pages of that story…. gosh!