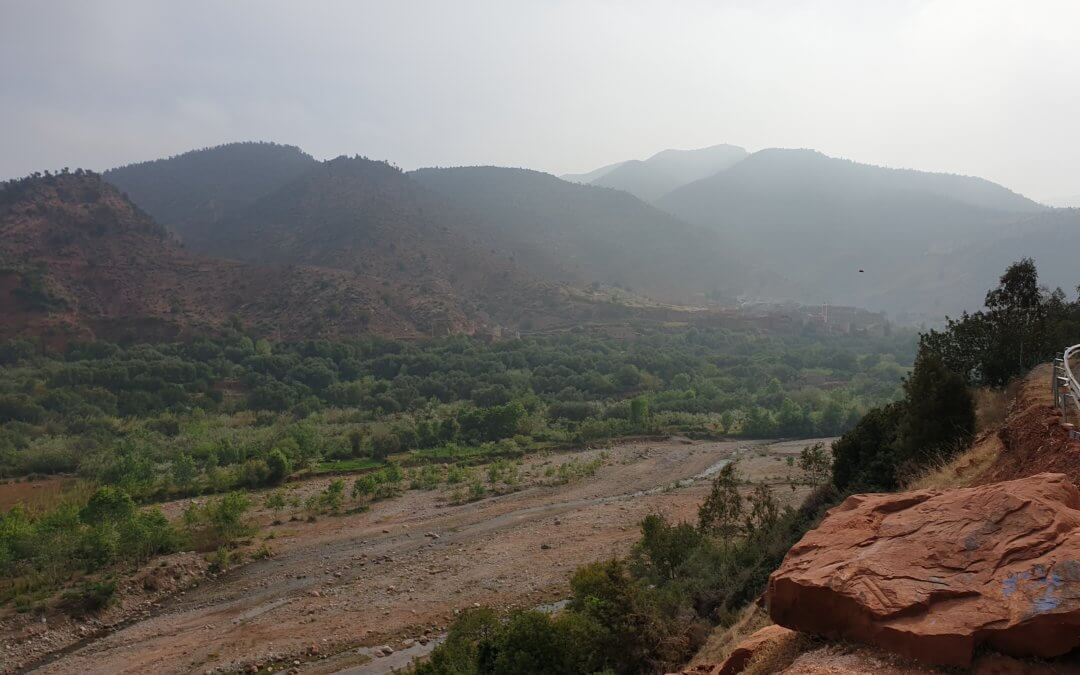 This is part 3 of the story of our untimely travel to, experience in, and evacuation from Marrakesh, Marocco shortly after the outbreak of the coronavirus pandemic. For part 1, go to this link.

Yesterday a bunch of kids chased us down an alleyway, crying, “Corona! Corona!”

We were a little spooked. Why chase us? Didn’t they know we observed every precaution, washed our hands ten times a day, maintained the prescribed social distancing, and never came into contact with anyone infected?

Of course they didn’t. To them, we were just another white couple bringing a dangerous foreign virus to their homeland. Kids, you see, don’t run businesses, they don’t need to be nice to outsiders, or maintain a pretense of cordiality. Kids can say anything they like, and “Corona! Corona!” was as much as anyone needed saying to let us know that we were not welcome.

For a moment, I wondered: is this how racism feels like when you’re on the receiving end? We were branded by the color of our skin, excluded from that broader Us that makes up a crowd. Suddenly we became Them, amidst a vastly more numerous sea of other-colored Thems.

This, we realized, was a bad time to have come to Morocco; to have come anywhere really. All around the globe, people like us, hundreds of thousands of travelers were realizing that they should’ve stayed home; that listening to the governments, airlines, and travel agents telling them it was safe to travel was not the best of ideas, and that’s to put it mildly. To put it any other way, it was bloody stupid to travel during the early days of a pandemic.

Like others, we thought we were safe—and not a danger to others—because we were healthy. But there are a dozen other forms of danger when you’re a European stranded in a former French colony in Africa. The moment you realize it, you start noticing things.

Like how the market food is handled, with no one washing their hands, or like how social distancing would be impossible to observe in a culture such as this, or—worst of all—how many people around us seem to have a cold.

“Coronavirus,” I joke with Momo, the owner of the Moroccan riad we chose for our stay. (A riad is a house with a garden or a courtyard on the inside, see picture.)

He laughs from over his laptop, a preoccupied, worried expression on his face, most likely because all his other guests have canceled.

Many, too many, people here seem to have this strange cold; most vendors on the market, half the kids playing football in the alleys, other tourists… No one seems to be bothered or worried. Only everyone is, but to notice it, you need to pay attention. All merchants, for example, are desperate to close the sale, often chasing you down the street saying they need money. They realized the season for tourism was drawing to an abrupt close?

“Don’t worry. Enjoy,” Momo says, seeing the look on my face. “Is safe here. Only eight cases in Morocco. No Corona.”

And maybe he’s right. Maybe I worry too much because I checked the online news too many times.

“I take you for an excursion. Three valleys,” he offers, and we agree because it sounds like a great idea for a distraction.

We get into the car. The landscape, though majestic in scale, is also dreary and grey because of the overcast sky. I can’t stop worrying.

I read somewhere that coronavirus can’t survive well in hot climate, and that’s why we’ve seen so few cases in Africa. Yeah, but what if that’s not true? What if they have it just the same, only haven’t tested enough people yet? Their complete dismissal of the problem would lead to a much wider spread. Everyone could have it, they just wouldn’t know it yet.

We stop in a small village to tour a family-run cooperative that produces argan oil products. To a city fellow like me, the process is simple but fascinating in the same way the idea of a chicken becomes much more interesting after you see one laying eggs. But I can’t help but notice that everyone, from the teenage, English-speaking girl, who gives us the tour, to her ancient grandmother who plucks the kernels of the argan tree from their shells, seems to a cold too. Did the virus reach here as well? It would make sense, it’s a perfect tourist spot, lots of people come this way every day, touching the same tools, and eating from the same bowl of argan peanut butter. I doubt anyone here washes their hands more than once a day.

A police patrol stops us on the way to the next settlement. Shit, I think to myself, what if we missed some announcement, some government directive that went into effect today? What if Momo dismissed it the same way he dismisses the dangers of the virus? The Moroccan policemen are serious looking, both have long rifles. They get into a heated argument with Momo, it’s all in Arabic so I can’t even guess if we’re in trouble or not. In the end, they take a bribe and let us go.

“We should’ve stayed in the hotel,” I tell to my wife.

“Try to enjoy what we can.”

I concede, but don’t really feel like enjoying anything.

In the second village, located at the base of a mountain, a guide takes us for a hike up to see some famous waterfalls. I can’t even remember what they were, I spent most of the way up going over the many scenarios for how our vacation may end sour. As we climb up some slippery stone, the guide tells us that he heard on the TV that everyone who wants to leave Morocco should leave today because the government is closing all borders at midnight.

We hurry back to the car, but apparently not fast enough since a carpet vendor manages to stop us. I tell him we need to leave, but he’s not convinced.

“Inshallah. (If God wills it.) If you are deep your in heart a good person, you will not be sick.”

I want to reply, but my wife tugs me on. “Don’t tell them you’re an atheist, let’s just get out.”

Once we’re back in the car, I ask Momo to take us back to the hotel.

“Yes. They’re closing the borders, we need to try to get back home.”

He doesn’t look happy, or convinced for that matter, but he drives us back to the hotel.

On the way back I read that all the flights are canceled already, that thousands are left stranded on the airports in Marrakesh and Agadir, and that the Moroccan army is already constructing field hospitals and quarantine camps. The German embassy says it is practically impossible to leave the country now. Others on social media say that those still in Marocco need to prepare to stay for the next couple of months. A group of Polish people decided to buy some tents, supplies, and have left for the desert to wait until the whole thing blows over. My hands are cold and shaking.

On our way back we drive by some trully picturesque sights. Snow-covered mountain peaks, vast valleys of red, clay-rich soil, camel caravans and tiny villages tucked between the folds of the rock far away, like toy houses scattered over a blanket. But I barely notice any of it. I can’t stop thinking about what a drastic turn for the worse our life might have taken without us even realizing it; how months of life in a quarantine camp might look like; and how little we can do about it all because it’s too late.

Every website I visit confirms my suspicions. TUI has canceled our travel contract, there are no more flights to Europe, and our government has no way of getting us back.

From enjoying our exotic holidays to being overcome by dread in the space of a single day.

Why were we so bloody stupid to have left in the first place? We should’ve known, I tell myself, even if there was little indication of how fast the situation would turn sour. And now, we were stuck in Morocco for Allah knows how long.

In the evening, Momo comes up to our room. Says he received a call from a friend from the travel agency and that someone will pick us up at 5 AM, take us to Agadir, and that there’s going to be a boat back to Germany.

“A boat? But that’s like a week of travel, and most boats get locked out if there’s someone sick…” my voice trails of.

He shrugs, and I don’t even know which one is the worse idea; to stay here and risk military quarantine, or to go on a boat and risk getting stuck at sea.

If there really is a boat that is, because our travel agent has sent us an email to the effect of “We’re sorry, you’re on your own.”